Difference between revisions of "Flow Graph"

Flow Graph is a standard tool in CryEngine Sandbox Editor. In this version of the Editor though it also features a major extension – Quest System Flow Graph.

The standard Flowgraph is used for various game features such as screen effects.
For further information on this standard usage please consult CE 3 documentation.

The tool is used for:

All flowgraphs (FGs) are storable in XML files. Quest FGs however are stored in DB (with XML as an auto-generated backup). When you open a FG of the type “quest” the tool switches to the Quest System FG mode. This mode uses its own set of nodes and cannot be combined with the standard nodes. You can find all the Quest System nodes under the Quest node group. 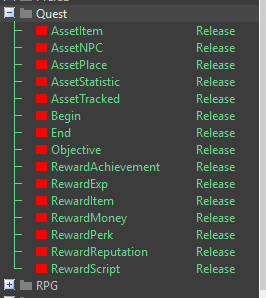 All Quest FGs ought to be stored under the Quest folder. 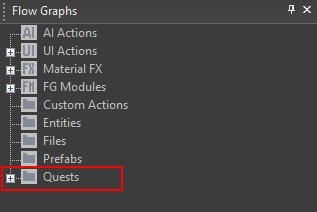 Across the tools and game systems there are 3 different things commonly called “quest”: