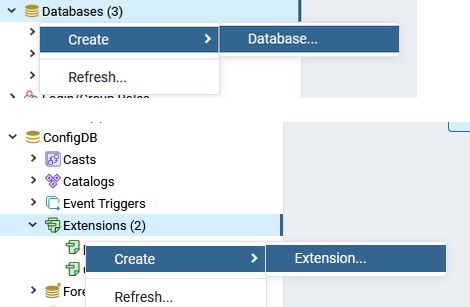 When using PostgreSQL 12 or newer, you will get an error message about "adsrc" column. To fix this error, open sequences.sql in text editor and replace all "adsrc" with "pg_get_expr(ad.adbin, ad.adrelid)", then save file and re-execute command.

You can check yourself whether the database has been set up properly by looking at the START values of the sequences in the ConfigDB database. The values in the modding schema should either be equal to values in the cmd output of the first psql.exe command above or a sum of one of these cmd output values and your offset. Similarly, the value in the public schema should be equal to the value in the cmd output of the second psql.exe command above. Don't fear the browser warning below, your setup is automatically saved and the browser can safely be closed without having to redo the database setup. You have to remember your password though.